Bay Area transit advocates, with the help of the Metropolitan Transportation Commission’s Blue Ribbon Transit Recovery Task Force, are finally making some headway towards creating a “transport association,” or a Verkehrsverbünde, to use the German term for it. The idea is to get transit agencies out of the business of fare collection and to create an umbrella agency that integrates fares, branding, and schedules to make the Bay Area’s thirty-plus transit operators appear to the rider as if they were one, rational system.

To help attain this goal, Seamless Bay Area, the group leading this effort, wants rider-advocates to “adopt” a transit agency, attend its board and other public meetings, and help lobby towards this goal.

From a Seamless statement:

These ideas are not just fantasy any more – these are some of the policy options that are going to be coming forward in September in the recommendations of the regional Fare Coordination and Integration Study being led by transit agencies and MTC.

Seamless also points out that “integrated fare policy changes have the potential to make Bay Area transit far easier to understand, more affordable, and more accessible. They’re the type of common sense, impactful changes we need to pursue immediately to drive major ridership increases in transit use — which we need urgently to avoid catastrophic climate change that contributes to our ongoing statewide drought and worsening wildfires.”

In addition to urging people to contribute comments at board meetings of Caltrain, BART, SFMTA, VTA, and others, they provided a timeline of upcoming MTC and Fare Integration Task Force meetings: 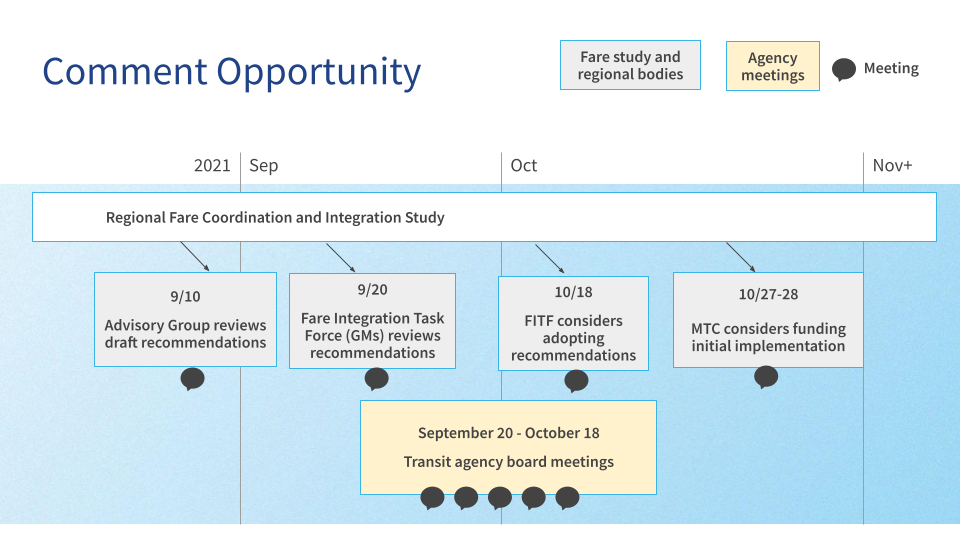 Be sure to adopt a transit agency here.