Some 100 advocates, policymakers, parents, and kids gathered on the steps of San Francisco City Hall Tuesday morning to demand an end to attempts to turn the J.F.K. promenade in Golden Gate Park back into a high-traffic thruway.

David Miles of the Church Of 8 Wheels, a roller rink and skate school in Golden Gate Park, told Streetsblog he’s tired of people asking for “compromises” that would let cars back on the 1.4-mile stretch that’s been opened to families, skaters, pedestrians and cyclists since the start of the pandemic. “I believe in compromise,” he told Streetsblog, but it’s hardly a compromise when groups demand that cars be permitted on every road in the park. “I have to take thousands of pounds of skate equipment to my rink,” he said, noting that he manages just fine because there are plenty of alternate routes for motorists through the park.

The advocates have collected over 6,000 postcards written in support of keeping half of J.F.K. car-free, which they stretched over the steps of city hall to illustrate how many people want J.F.K. to remain a promenade. “We need this,” said Walk San Francisco’s Jodie Medeiros, in an address to the crowd. “We need this for our safety. Car-free J.F.K. gives us a place to walk without the threat of dangerous traffic.”

Supervisors Dean Preston and Matt Haney both spoke at the event to promise their support for keeping J.F.K as a place for people. “We’re in a climate and road safety crisis,” said Preston. “Prohibiting or limiting a road from cars is not ‘closing’, it’s opening a road to greater uses.”

“This is the jewel of our city, Golden Gate Park, and for too many years it’s been dominated by cars,” said the San Francisco Bicycle Coalition’s Janelle Wong to the crowd. “Tell your friends, tell your neighbors, tell family members to contact their supervisors.”

Many advocates expressed frustration at the threat that sometime in the next month or two a vote of the Board of Supervisors could end up putting cars back on this short stretch of road in the park. From a Walk San Francisco release written by Medeiros, explaining why the decision on J.F.K. could still be reversed:

With more than 300,000 people using (and loving) car-free JFK Drive each month, it is hard to believe it could go away. Especially when car-free JFK Drive keeps getting better, with important accessibility improvements like daily shuttle service and a new 100% free ADA parking lot.

The ad she’s referring to features a Service Employees International Union (SEIU) employee claiming that not allowing parking on JFK drive is forcing them to take a dangerously long walk at night to their jobs at the museum: 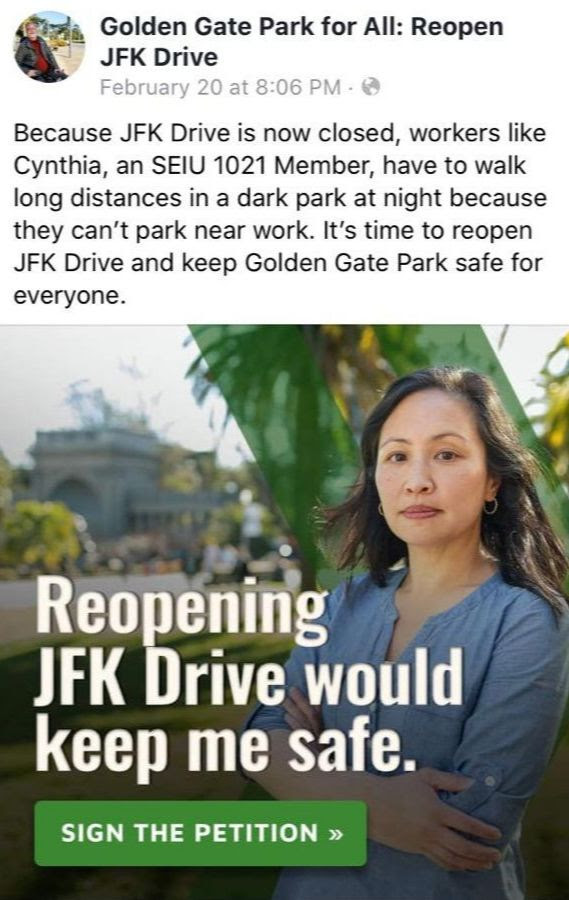 On the other hand, if the museum let them park in the garage right under the museum, they wouldn’t have to walk at all.

Preston pointed out that this kind of ad is like the disingenuous arguments that try to portray putting cars back on J.F.K. as going against “equity” and “recreational redlining.” “Many low-income residents don’t have cars,” he said. “They go by foot and buses, or even get around on a bike.” He added that the tunnels that go to the 800-space parking garage under the museums can make the concourse available for people who must drive, without allowing cars on J.F.K.

“Golden Gate Park is supposed to be for people to escape the hustle and bustle of the city,” said Miles. “How do you do that in a park when cars are running over people? When the cars are off the street, it becomes a recreational resource for everybody.”

“If we can’t keep 1.4 miles in our park car-free, there’s no hope for San Francisco,” said Medeiros.