An urbanist moves from S.F. to Berlin and reflects on how a progressive city can change from car-centric to people-focused almost overnight

Nik Kaestner, the former Director of Sustainability for the San Francisco Unified School District who pushed for a Dutch-style roundabout near a school in Mission Bay, moved to Berlin earlier this year. He was so impressed with Berlin’s recent transformations that he started blogging about it. He asked Streetsblog San Francisco to cross-post his reflections on the impressive accomplishments of his new city.

I recently came across this article about Berlin, and was fascinated by some of the author’s findings: 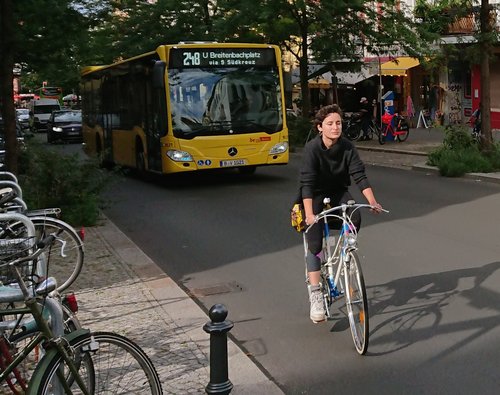 Berlin has the highest share of people walking, biking, and using public transit to work (86%) of all European capitals. Not surprising, considering only one third of Berliners own a car. Astoundingly, there are more people biking in Berlin than in the four other major European capitals combined! Read it and weep, Paris, London, Rome and Madrid. 😉

There is no shared mobility concept you won’t find in Berlin. That’s for sure! With thirty-three different providers and over 50,000 vehicles, Berlin has the most of any city in Europe. This includes scooters, bikes, mopeds, cars, vans, and shuttles, most of them electric. And several of these can be easily booked on the world’s largest mobility-as-a-service platform, Jelbi, which also includes taxis and transit. 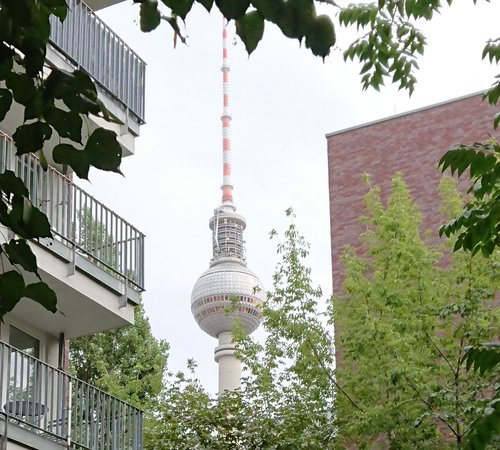 No other European metropolis offers more inner-city forests, parks, and lawns. Officially, the stats show Stockholm, Barcelona and Moscow ahead, but each of these has a huge forest at the edge of the city limits that is not within reach of most residents on a daily basis. In Berlin, there are parks, playgrounds, and trees around every corner and in the middle of many blocks!

But Berlin also has wide streets and plenty of cheap parking ($12 annual parking permit, anyone?) that validate the supremacy of the car. That’s because Berlin was largely destroyed during WWII and built up as a car-first city, much like Rotterdam. Consequently, Berlin’s transition away from car-centrism might hold more lessons for the US than older European cities with an ultra-dense urban core.

What are those lessons? Berlin is in the middle of a multi-year effort to implement its vision of a livable, climate-friendly metropolis of the future, and four initiatives are particularly relevant to an American audience.

San Francisco voters passed its Transit First policy back in 1973. Thirty years later, San Francisco’s commute driving rate had actually increased from 42 percent to 51 percent. While there has been slow but steady progress since then, even to this day, the pitchforks come out whenever a new bulb-out, bike share station, or transit lane is proposed.

Berlin passed its Mobility Act in July 2018 in response to a public initiative in favor of more bike infrastructure. The Greens had recently come to power as part of a center-left coalition and were ready to implement many of the ideas that advocates had been asking for.

All of this is backed by a budget that has (almost) doubled to 2.1 billion Euros per year and an additional 28 billion for the new public transit fleet. Impressive.

After the Mobility Act was passed, Berlin built up its capacity to deliver livable streets projects and initiated planning efforts to make them a reality. The pace of this ramp-up has not placated livable streets advocates, although in my humble opinion there is nothing to complain about. Check out the number of projects being planned by the newly established bike agency, InfraVelo, including parking infrastructure, this new bicycle bridge, and a network of bicycle highways. Berlin also recently passed Germany’s first pedestrian law, approved a bike master plan that includes 3,000 km in total bike lanes, and agreed to an expansion of the U-Bahn, S-Bahn, and Tram networks.

Where does Berlin plan to get the money? The city is currently subsidizing half of transit operations (the rest comes from ticket sales). Going forward, this will be augmented by higher residential parking fees and expanded curbside parking management as well as a mandatory tourist transit pass. The latter has the benefit of raising revenue as well as encouraging tourists to get around without a vehicle.

Other plans of the re-elected Red-Green-Red coalition government include the removal of two stretches of highway in Berlin’s west, fast-tracking transit projects, an increase in the number of play streets and traffic-calmed neighborhoods (see below), and street closures around schools during drop-off and pick-up. On the flip side, the Social Democrats also managed to include the construction of a new boulevard in the eastern part of the city, much to the chagrin of the Greens and their supporters. The latter have been pushing to repurpose the current extension of the A100 highway, but were only able to prevent the next section from going into planning.

LESSON FOR SF: Say it like you mean it and support it with the big bucks!

KIEZBLOCKS From Cut-Through to Urban Oasis

Barcelona has its Superillas, Berlin has its Kiezblocks. A Kiez is the Berlin term for neighborhood, each one of which is generally centered around a commercial street and can best be equated with the concept of a fifteen-minute city. Kiezblocks are traffic-calmed neighborhoods in which cut-through traffic has been eliminated to increase safety and allow neighbors to enjoy the streets for other activities. Often these go hand-in-hand with play streets, which are (usually temporarily) closed so families may enjoy some quiet playtime in front of their apartments.

Barcelona has been at it longer and has big plans to calm many of its central streets. Its traffic calming measures are also implemented by the city itself. In Berlin, like in San Francisco, the city sometimes needs a little help dreaming big.

Berlin is a hugely under-appreciated cycling city. Often overshadowed by the accomplishments of Amsterdam and Copenhagen, over the past two decades Berlin has quietly experienced what is perhaps the most striking cycling renaissance in the world. On any given day, more trips are now made by bicycle in Berlin than any other European city. Berlin […]
"In a compact city like San Francisco, one person’s fun is another person’s unwelcome late night party. From the crackdowns on Halloween to nightclubs to street festivals and events, some have claimed there’s a “death of fun” march across the city. Other cities are moving in the opposite direction: Paris just decreed to keep its […]
From SPUR: Image courtesy of Flickr user malouette. In a transformative shift of thinking about safe mobility, San Francisco, San Jose and cities across the country are committing to Vision Zero: a significant effort to eliminate traffic fatalities and severe injuries. How have major European cities, including Stockholm, Sweden and Berlin, Germany, dramatically increased road […]
The San Francisco Bicycle Coalition’s Board of Directors has selected Brian Wiedenmeier as the organization’s next executive director. Wiedenmeier is not a newcomer to the SFBC. He spent the last two years as the organization’s development director. “Brian’s professional accomplishments and experience really stood out throughout this hiring process,” said Brianne O’Leary Gagnon, president of […] San Francisco is the latest city to eliminate minimum parking requirements — a win for pedestrians and affordable housing advocates.